Ecumenical Service for Peace has held a strategic workshop to empower the Youth to promote peace and a democratic culture in Cameroon. The workshop held at the Desmond Tutu Hall of the Norbert Kenne Memorial Peace House in Yaounde on December 1st 2017.

The socio-political context of Africa in general and Cameroon in particular is characterized by crisis arising from poor democratic transitions which jeopardize peace and stability. In an effort to respond to this trend in Cameroon, the Ecumenical Service for Peace, brought together dynamic youths, empowered them on notions of Peace and democracy to facilitate their contribution to building a culture of peace and security in Cameroon. The workshop was in line with objective 16 of the UN Sustainable Development Goals and the Universal Declaration of Human Rights.

The workshop was facilitated by the young, energetic and dynamic Director of SeP, Solomon Hope and moderated by Pokam Fabrice of World Dynamics of Young People (DMJ), a partner organization. It brought together 30 youths (17 males and 13 females) drawn from youth organizations in Yaounde and its environs. There were introduced to Ecumenical Service for Peace and the work it has been doing since its creation in 1995 to promote peace and a nonviolent democratic transition in Cameroon.

While the main objective was to empower the youths on peace and democracy, the workshop was specifically directed at:

The methodology of the workshop was participatory and interactive. Participants listened to presentations, went into groups to reflects on the key themes and presented the results of their reflections in plenary.

The first module permitted the participants to reflect on the notion of peace. The focus was on trying to give a practical definition of peace and how the participants could work to promote peace. Peace was defined in terms of a process that could only be attained and sustained, if people consistently approach conflicts positively. Engaging with conflicts positively would transform such conflicts into cooperative interactions for the common good. Participants were encouraged to face conflicts positively with the intention of transforming them into positive interactions. The facilitator then clarified that if participants conceive conflict negatively, it will arouse negative sentiments and they would be tempted to respond negatively. They were challenged to always look for the positive side of a conflict.

Other concepts that were examine with regard to a culture of peace were the concepts of reconciliation, forgiveness, compassion and restorative and retributive justice, The discussions culminated into a general understanding that forgiveness is very important and heals the pain associated with a violent act. A person is said to have completely forgiven when the pain associated with the violence suffered is no longer associated to what caused the pain. To reconcile was seen as being able to relate with someone who violated you with the same confidence you had in the relationship before the conflict. While retributive justice was defined as crime equal punishment, restorative justice was seen as giving allowance for recognition of guilt and restoration to build the relation. Compassion was seen as the bases for restorative justice, forgiveness and reconciliation.

Participants also reflected on the causes of conflicts in Cameroon. Among the leading causes of conflict were tribalism, marginalization, assimilation, favoritism, discrimination, bad laws, extremism, election rigging, unemployment, bad governance, corruption, injustices, impunity, and violation of human rights. They were very worried by the war on Boko Haram and the Anglophone Problem and the approaches to resolve them.

A brainstorm on strategies to resolve conflicts was also done and the following methods were highlighted: Inclusive dialogue, balance development, promotion of values of meritocracy, fraternity respect and tolerance, transparent use of resources, accountability, peace education etc.

On the subject of democracy, the participants brainstormed and agreed that democracy was a system of governance which laid emphasis on popular participation of the citizens in the management of the affairs of the state. The major tool for decision making in a democracy was identified as elections. It was agreed that if the laws governing elections were not seen to give all the participants in the electoral process a fair chance of succeeding, then the law is bad and should be revised. They noted that though the electoral law of Cameroon had evolved positively, there was still need for some reforms to guarantee free and transparent elections in Cameroon.

At the end of the workshop, participants came up with the following resolutions:

The participants left the workshop enriched and empowered to play an active role in electoral processes in Cameroon as a strategy to promote a sustainable peace in Cameroon. They felt happy that the elections came at a time to permit them participate in the elections built for the year 2018. 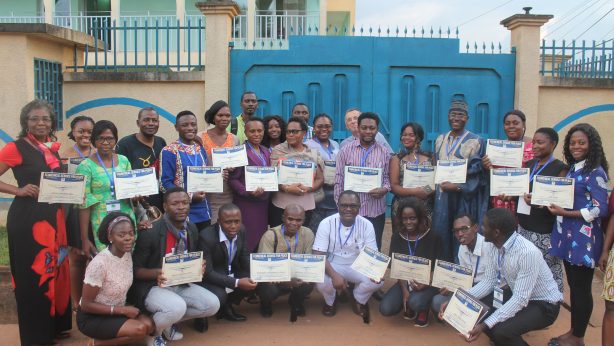